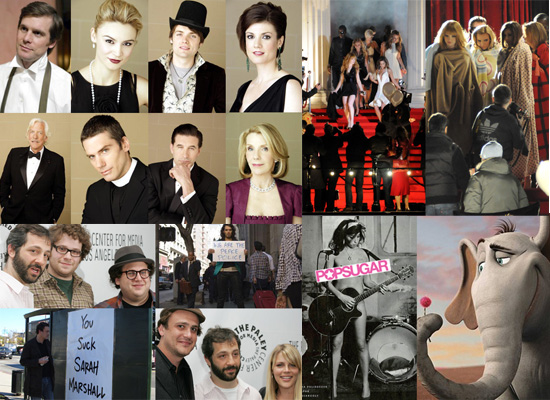 It's been a mixed week in the land of celebdom. There's been extremely sad news such as the death of wonderful director Anthony Minghella, as well as lovely images of Jennifer Lopez's twins being revealed for the first time. There was an incredibly confusing episode of Skins this week, and we also had out first look at Dirty Sexy Money. But, as you know, it's that time of the week where we test you on what you learned on the site over the past seven days. So what details can you remember? Let's find out!

What were Girls Aloud spotted filming an advert for?

Who was "showering" in public this week?

Who picked up the Sitcom Award at the RTS Awards?

Amy Winehouse got her kit off for charity this week, but in which magazine?

Which Royal couple did we spot skiing?

How much did Heather Mills win from Sir Paul this week?

What character did this week's Skins episode centre around?

And finally, which Hollywood star showed off her new hairdo at The Prince's Trust Awards this week?