Wow, it's been another busy seven days in celeb world! Madonna premiered her new video for "4 Minutes", the Rolling Stones screened their documentary Shine A Light to a celeb audience in London, and then we ended the week with a wedding as Beyonce and Jay-Z tied the knot in New York on Friday. But lets see how much else you remember in our weekly Pop Quiz! Good Luck! 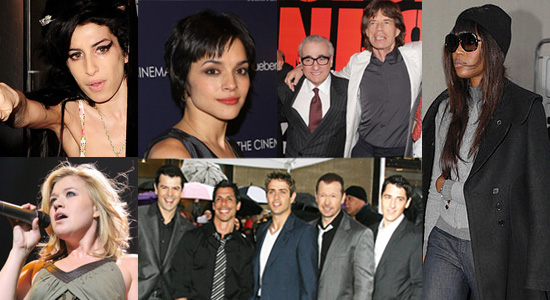 Which US TV show returned to our screens last Sunday?

Which chart-topper did we spot filming a new music video with balloons?

Which British comedian did we show you singing to a puppet?

Which megastar is on the front cover of May's Elle Magazine?

What did Amy Winehouse feed the paparazzi after her trash was stolen?

Doctor Who returns for a fourth series tonight, but who is playing the Doctor's assistant this time?

Who did we spot hiding under her umbrella-ella-ella in the rain?

Who jokingly threatened the paps with a styling instrument this week?

Naomi Campbell was arrested at Heathrow this week, but why?

Which TV presenter did we spot wearing the same outfit as she had on the previous night?