My girl FabUK is up at the Manchester In Fashion event over the weekend, and last night she took a night off to go and see The Ting Tings at the Academy. Here's her account of the gig:

Manchester and music have become synonymous. Since the early '90s when bands like The Stone Roses and Oasis came out of this great Northern city the music scene has exploded and The Ting Tings are continuing this dynasty. 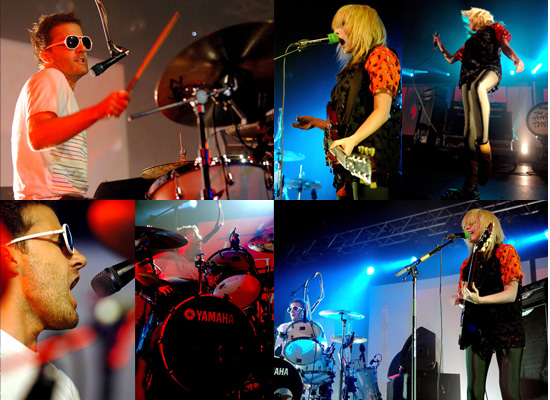 Last night the band played Manchester Academy which is quite a small venue and sold out very quickly (as did the rest of their tour). Katie White and Jules De Martino do not produce cutting edge music but rather feel good, dancey pop music and live are so much fun.

If you've so much as seen them on TV then you'll know that Katie oozes energy as she bounces around the stage, hits an enormous drum and swaps between various guitars. The only moment which she stands still for is their "ballad" called "Traffic Light" which White declares is their only slow song because "we like to see you dancing around".

They played most of the tracks from their debut album We Started Nothing including "Great DJ", "We Walk", "Fruit Machine", "Shut Up And Let Me Go" and the summer anthem "That's Not My Name". The highlight for me was "Shut Up..." which got the audience chanting along, pointing in the air and bouncing along to the music.

The set was quite short but as I pointed out to my gig companion, their album only has 10 tracks. The encore saw De Martino playing with a drum machine and teasing the crowd with snippets of Run DMC's "Walk This Way". I expected more crowd interaction over the Manchester link (the band are from Salford which is down the road) but the only hint of it came when White asked, "Are we 'aving it?".

Either way, I left the gig happy and humming the catchy fun pop tunes.