Can you believe we're seven episodes into the second season of Skins? Only three more episodes are left for the majority of this cast. Well, except the star of this week's episode, Effy, who will lead the next season's band of troublemakers. 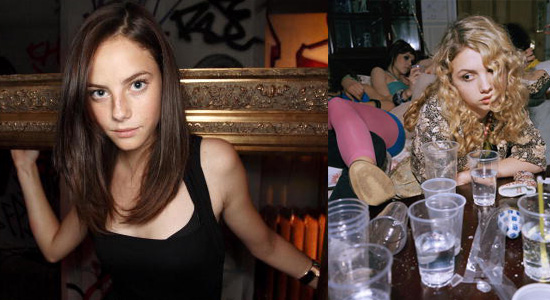 So Tony and Effy's house was an absolute mess – their Dad's away and their Mum was still pretty affected by everything that happened with Tony. And she was also taking his medication. Michelle wasn't replying to any of Tony's rather stalker-like contact. And Effy's still at the school with the interesting uniform – love that hat.

Her art teacher was very amusing, and inappropriate. But Effy's having a little problem with her emotional artistic inspiration. Enter new girl Pandora, who the art teacher invited to either paint, or get naked and pose. What a welcome to a new school. Not that it mattered, as Pandora is oblivious and fully admitted she was "useless", although she didn't go for the naked option, so that's something. The foolish/brilliant (I'm not sure which at this point) art teacher assigned Effy as Pandora's mentor.

For more of my thoughts, the rest of the recap and to let me know what you thought, just read more

Effy's acquaintance Jake arrived and he was pretty obsessed with the idea of sleeping with Effy, much to her annoyance. So he bothered her while I was pretty sure Pandora was hanging herself from a tree, but it turned out it was by her ankle. I'm not loving Pandora.

Sid showed up at the Stonem's house to see Tony and there's all kinds of tension going on there. Pandora opened Tony's parcel from Michelle, which ended up being the watch he bought her all crushed. I enjoyed Sid and Tony's awkward couch-based chat, and their secret handshake. Although every time Sid took a sip of that gone-off milk I felt a little ill. So, Sid had to get Michelle back for Tony in order for them to be friends, and Effy brings in some bargaining tools – if Sid does her emotional art homework, Effy will sort out their "soap opera" for him.

Effy took Pandora to Cassie to pick up their drugs for the evening, where Pandora was shocked by Cassie's new lifestyle (sleeping with everyone.) So Effy's first attempts to try and sort the Sid/Cassie thing don't go brilliantly, but the girl's scheming, that's for sure. And Pandora fell for Tony and got stoned. Oh, how I consistently wanted to slap her round the face and shout "wake up!" during this episode. Which I suppose is what Effy's doing with slightly more unorthodox methods.

Sid's first art attempt using four biros wasn't great, although I enjoyed it, so he was stuck in Effy's room while she, Pandora and Tony went out. Enter my favourite supporting character for a while - the doorman. I think I'd prefer it if he was in it more often, and Pandora... left. The doorman wouldn't let Tony in, but did allow the much younger Effy and Pandora into the club. And Jake was inside too, to sell the weed. Drugged-up Pandora danced like a maniac, and Tony was stuck outside reading the doorman's novel draft, kindly recommending that the "orgy scene comes before the disemboweling of the elvic hoard". Apparently this was good advice as he finally got into the club, only to see Effy giving away Michelle's watch and then being lovingly attacked by Pandora.

Meanwhile back at their place, Sid finally found his emotion using alcohol. After the clan returned we saw that Jake had found his way back to Effy's place and was sleeping in her room, ready to collect the prize he won for making over £100 from the weed. And what a prize – Effy set him up with Cassie, who he bonded with over her pet snails Sidley and Mischa. These people were obviously all wheels in Effy's little plan, as she was outside taking photos of the two kissing, which she then taped to the sleeping Sid. An odd tactic, but whatever works to get them all back together with the right people.

Effy must be a great person to have in your family – Michelle received her watch back, all fixed and with "Forever" engraved in the back of it. Yay. Meanwhile, seeing those photos, Sid ran to Chris's place to see Cassie and Chris threatened him rather noncommittally before disappearing. And the showdown begun.

Sid told Cassie he never loved Michelle, that he loved her. That she wasn't there when his Dad died and Michelle was. And, after a little more fighting and some crying, they kissed! Hurrah! I enjoyed Chris's little interruption as usual – I think you can tell I love almost everything Chris does. Meanwhile, Tony called Michelle again, who finally answered to say "I love you too" before hanging up. Good progress.

And so we go back to Effy's school, where it turned out, Sid's picture was for Pandora, and Effy's piece... well, she's turning in a 'conceptual piece' that no-one can see. And so she knows she'll be expelled. Dad Stonem comes back at the end of the week and the house looks super-clean. And Tony's all happy and, well, I would say back to normal, but... Tony's a new normal now. A happy, more-regularly-nice normal.

So next week is Jal, and it's a fantastic episode. How's she dealing with her pregnancy? And Cassie has secrets. Secrets about other people. It's going to be good, I can tell you that right now.

But that was Effy's episode – she sorted everything out as usual. Bravo to her! What did you think of this one? Did you prefer it to the insanity of last week? Or did Pandora make you want to scream? Let me know!