Okay. I'm stilll a little upset by the events in last night's episode of Skins, not to mention the fact the cast will be replaced next season. Seeing it in black and white is a little sad, even if I was aware it was going to happen. Anyway, we were back with Jal last night and her crazy family, which meant we got a little more Chris too! 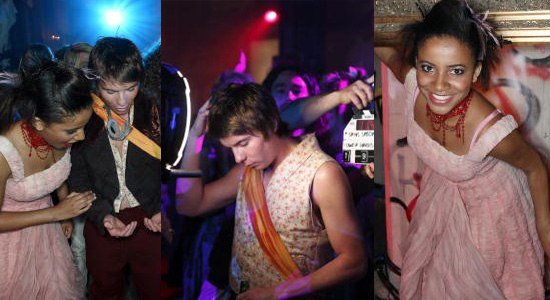 I wasn't a massive fan of Jal in series one, and her episode was honestly one of the ones I didn't enjoy too much. But this series has really amped up the storylines for her, and Larissa Wilson is doing really well with them. I was pleased to see her family and extended family again, I often forget what a mad house she lives in, but it was sad that her dad won't give Chris the time of day. I guess if he doesn't watch the series then he's probably going to be a little concerned. Scratch that... if he watched the series that could make things even worse.

The A-levels are days away for the teens, so it's a pretty nerve-wracking time for some of the characters. Anyway, Jal's practicing her clarinet as she has an audition to get into music college. The scene where she was in her room, checking herself out in the mirror, crying a little and trying to practice for her audition as so sad. Oh, and Chris is taking pills out of a medicine bottle. And not looking happy about it. Something's up.

For more of my thoughts on this heart-breaking episode as well as a recap, just read more

Cassie know something's going on with Jal, as she's some kind of genius, so she tries to coax Jal's secret out of her whilst she's revising. Her impersonation of Jal was dead-on, and she told Jal she knows she's pregnant and not telling Chris. Cassie hints she knows something about Chris too before disappearing back to her room... and he then walks through the door, all adorable.

At college the next day, Maxxie introduces James as his new boyfriend, and Sketch doesn't look too happy. As we found out earlier, Michelle's still speaking only in Spanish to Jal in preparation for her exam. So that doesn't really help Jal to tell her she's pregnant, she does it in Spanish, and Michelle doesn't understand. Then Tony showed up and took her off somewhere so he could carry her books – it's still slightly freaking me out that he's being so nice these days. Of course Cassie shows up and whisks Jal away to a terrible high street casino, where the guy in the booth seems to know everything about them bar their real names. Cassie goes there to escape apparently. And continues to hint that 'other people have secrets'. I was getting a huge knot in my stomach when she kept saying that, as it can only mean badness for Chris, right? Jal wins a special gold coin at the casino and heads over to Chris's place. Before not going in, and just walking away.

Chris is lying in bed looking worried and waiting for Jal, who hasn't shown up. Oh dear. Meanwhile, Jal is summoned for a family meeting where they announce they're starting the 'Do You!' clothing range and are trying to get her Dad to invest. Jal's not too interested... and blurts out that she's pregnant, leaving the rest of them stunned. Her Dad follows her out the room and asks her what her plan is, gives her her options and tells her he's so disappointed in her. Jal asks where her absent Mum is and he leaves the room, visibly upset. Her brothers come in and hug her though, which is a nice family moment. Until one of them has the inspiration to start a 'Do You!' baby range.

Chris is waiting outside when Jal leaves her house for her audition, but she's rushing and won't speak to him properly. Chris keeps saying things like "we'll run out of time" – he doesn't want her to go to the audition and move away – and his little speech made me so sad. Especially when he said "I could be dying and you wouldn't know about it" and I knew it was going to be bad. As always he leaves her on a joke, before shoving his hands in his pockets and walking away. Oh Chris.

Jal goes for the hardest piece at her music audition after being slightly taunted by those auditioning her. And she plays superbly. Michelle goes to Chris's place to see Jal (having worked out what she was told earlier) but Cassie opens the door. Michelle wants to tell Chris, but Cassie tells her he's gone to bed as he's not feeling well again. There's still a little bad blood between Cassie and Michelle from the whole Sid/Tony situation.

Jal comes home to an empty house, and then sees her Mum in the kitchen making food for her. It's not clear how long it's been since they've seen each other but it's been a long time. It turns out that her Mum and Dad have been speaking over the years, and she knows Jal is pregnant. That doesn't make up for her absence over the years though, and Jal goes to leave. Her Mum leaves her by saying that the one thing her father couldn't forgive was the fact she lied to him. And she tells her not to make the same mistake with Chris. Wise words.

And so it's finally time for the Spanish aural exam, and Jal tells her examiner she's pregnant in a long speech in Spanish. Pretty impressive. Michelle's waiting for her outside and gives her a massive hug. And so it's time to go and tell Chris. She's prepared – she's dealt with a lot over the past couple of days. But the door to his flat is open, and Cassie is sat on the kitchen table all curled up and tells her that she's been trying to call her. Oh no.

The next thing we see (after an advert break that felt like it was an hour long) the girls are sat in the hospital, and Cassie reminds Jal she's not the only one with a secret and that there's something wrong with Chris – he fell on the floor with blood in his ear and Cassie didn't know what to do. Jal goes in to see him, and he's hooked up to machines in a hospital bed. He's pretty drugged up and doesn't realise it's Jal. He tells her everything is cool and when she asks what pills he's been taking, he tells her it's a secret, and not to tell Jal – because if she tells Jal then she won't move in with him anymore. Chris! And that's when she tells him she's pregnant and trying to work out what to do. He's pretty much out of it though.

The nurse tells Jal that Chris is having an operation – he has swelling on his brain caused by a clot, and it's hereditary. Remember his brother died when he was younger? So sad. And Jal panics, chasing after his bed as he's taken down to surgery. He lightens the mood slightly with a typical Chris-quip as he drifts in and out of consciousness and she gives him the gold coin from the casino, telling him it's all the luck that she's got. And so he's wheeled off into surgery, holding up the coin so she can see. Okay. He has to be okay, right?

Next week it's Cassie... lets hope it reveals a little about her state of mind at the moment. And that will be the second-to-last episode with this cast. Anyway, lets focus on the present, not the future. What did you think of the episode? Did you suspect something was going to be going on with Chris, or did that completely come out of the blue for you? And how are you liking Jal these days?