Angelina Jolie and her family have been in Budapest for the last month while she works on her still-untitled directorial debut, with Brad Pitt making frequent cameos on set to photograph the proceedings and maybe even scoring a role as an extra. She recently granted an interview to a Hungarian outlet about the movie, saying she's tried to focus on the Serbian/Muslim love story aspect. The actress, who just donated $150,000 to an adoption organisation, says she was compelled to make a film that sheds light on the human cost of war. She said: 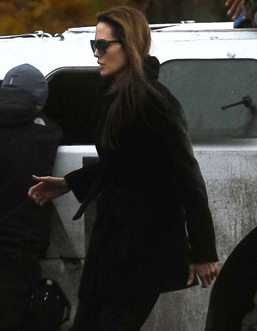 The rare interview from Angelina gives great insight into her work, especially considering the delicate subject matter of her project. So, tell us what you think of Angelina sharing about her filmmaking — interesting or too intense?