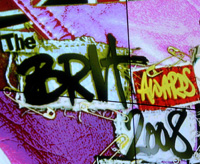 Well, you guys voted and it's time to collate the data and tell you who your winners are for our PopSugar UK Brit Awards Bets 2008: