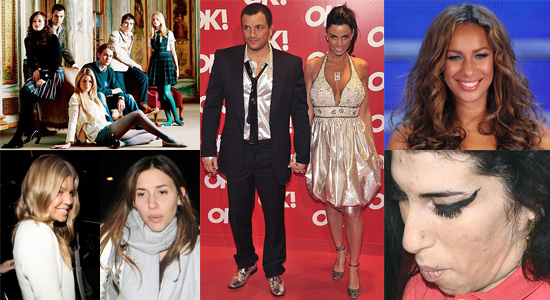 Although Easter Monday made this week a bit shorter than normal, it was still jam-packed with celebrity shenanigans! Kate Moss had a busy week and David Beckham celebrated an impressive milestone, but were you paying attention to everything else that was going on? Take our quiz to find out!

Source, Source, Enfoque/BigPicturesPhoto.com and The CW

Who was Konnie Huq lunching with in LA at the beginning of the week?

What reason has Amy Winehouse's spokesperson given for her skin problems?

Who did Cat Deeley party with at Villa club in Hollywood earlier this week?

We asked you what you thought about celebrity endorsements as the new Kit Kat Senses bar was released: who was busy promoting it?

Katie & Peter's new TV show started this week and they attended an OK! Magazine party — in which country?

Mel Blatt and Fergie celebrated their birthdays this week — how old are they?

Leona Lewis' single "Bleeding Love" hit the number one spot in America, how many weeks after its release?

Which young actress was inducted into the Girl Scouts this week?

Who is going to design the wardrobe for Kylie's upcoming tour?

Gossip Girls started this week (woop!) with an amazing soundtrack, but which song accompanied the opening scene?