It's been another busy week for our favourite celebrities. Britney Spears had an exciting time, celebrating her birthday and turning on Christmas tree lights, while Sienna Miller and Keira Knightley were reunited for the British Independent Film Awards. Can you remember everything else that went down? Take my quiz to find out! 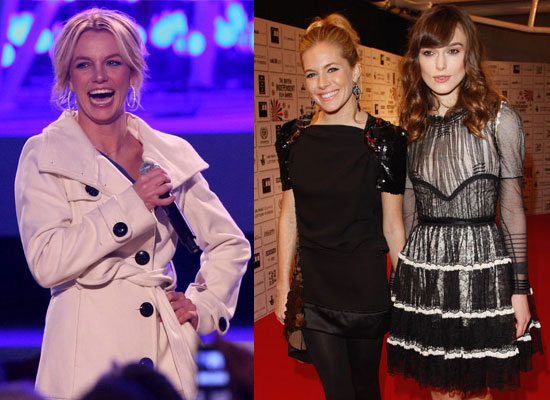 In addition to Britney, who performed on last week's X Factor?

Which model was in the audience of the X Factor last weekend?

In which city did Take That showcase their new album on Monday?

Who is the new face of Ann Summers lingerie?

Why was Blake Fielder-Civil sent back to jail this week?

Who did we spot practicing ice dancing this week?

What did Brad Pitt tell Ellen DeGeneres to get on her show in order to tempt George Clooney to appear?

What new product did Victoria Beckham launch in the UK this week?

Who is taking over from Terry Wogan as Eurovision Song Contest commentator?

Who said of acting: "I'm playing a character so if I drop my towel and show my bum it's not my bum"?