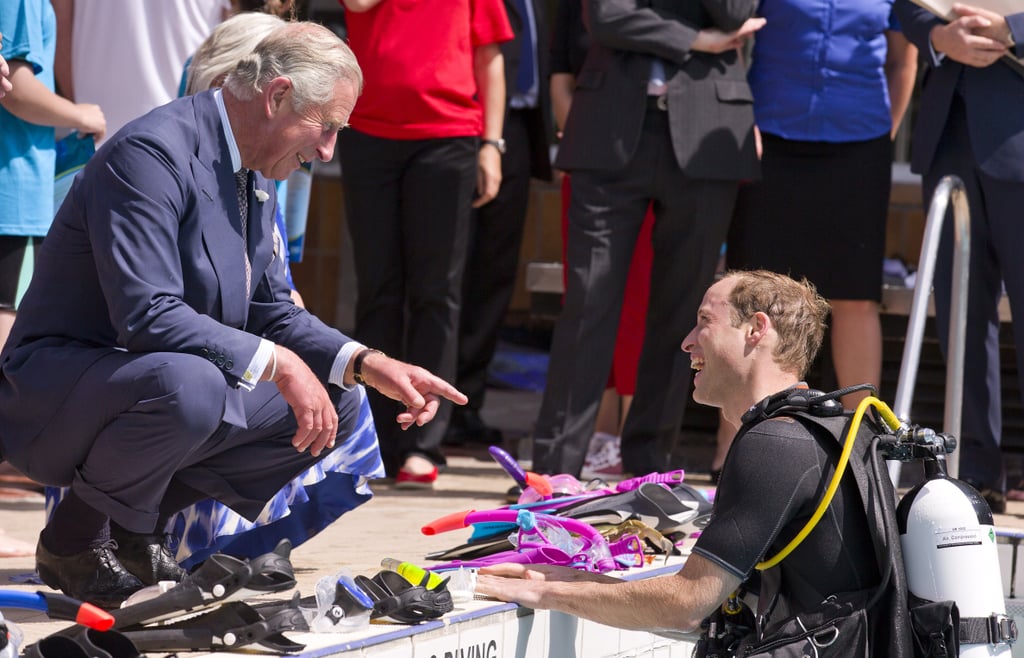 Prince William put his royal physique on display on Wednesday when he donned a wetsuit and snorkel gear to splash around with the British Sub-Aqua Club. The Duke of Cambridge was joined at the event by his father, Prince Charles, who looked a little displeased when the chairman of the club said that Charles was "quite buff" during his own diving days in the 1970s. After the Prince of Wales gave a quizzical look to his son, William joked, "Pa, you should be pleased!" (To be fair, Charles was quite buff back in the day!) The Prince of Wales saw the lighter side of the comment when he took the stage, saying, "I know my eldest will now demonstrate his buff credentials," referring to William's skintight snorkel gear. Of course, the focus of the event wasn't just on water sports and buff royals, as William said during his own speech that he hopes that he can get his son, Prince George, into snorkeling when he gets older. "I hope one day my son, George, might follow in our footsteps," the duke said. "At the moment, bath time is quite painful, but hopefully donning a snorkel and mask might calm him down." While George may be a difficult bather, a new report has surfaced that he just recently started to sleep soundly through the night because he had difficulty digesting food. However, he is now on solid food and is reportedly on good behavior. There will likely be more reports on George as the littlest royal prepares for his first birthday on 22 July.

Later that day, William kept his clothes on when he joined Prince Harry to make royal history with the first-ever royal Google+ Hangout. The brothers also snapped a selfie together inside Buckingham Palace, making them the highest-ranking royals to ever do so.