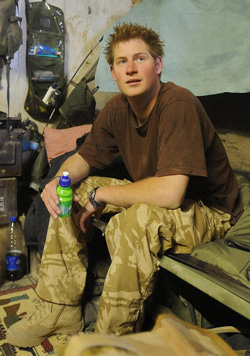 Yesterday we told you how Prince Harry had been fighting the Taliban in Afghanistan for 10 weeks, and was 4 weeks shy of his full tour when some foreign websites outed his whereabouts. Now the MoD have confirmed that Harry is to be withdrawn from Afghanistan and will be on his way home shortly. Patrick Marriott, a spokesman for the Army, said,

"There's been an enormous amount of planning that's gone on into this, and the fact that this was going to break was always thought a possible outcome and so plans are there - and I think people can be reassured about that."

To see some footage of Harry in Afghanistan, where he really shows his great true colours, read more