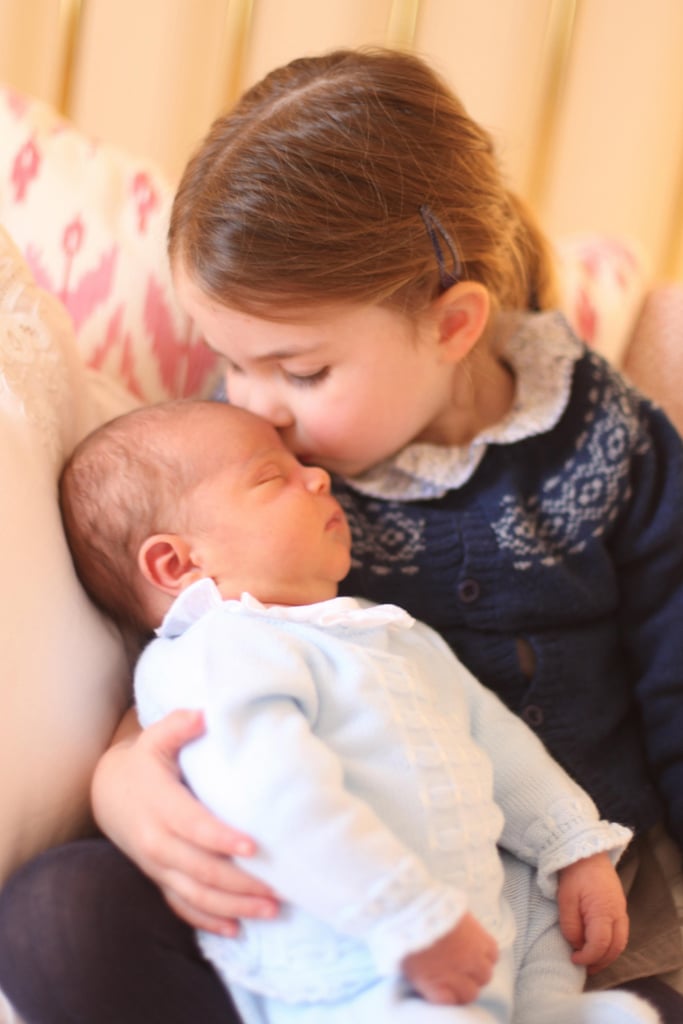 Prince Louis and Princess Charlotte Are the Sweetest Duo in His First Portraits!

Prince Louis's first official portraits have arrived! Just a week after his exciting debut on April 23, new mum the Duchess of Cambridge shared more sweet photos of her baby boy taken on Princess Charlotte's third birthday at Kensington Palace. In one snap, big sister Charlotte plants a kiss on her brother's forehead, and, yes, our hearts are melting. In the other photo, Louis stares off into the distance with a serious look on his face, closely resembling his proud father, Prince William.

Continuing with tradition, Kate was behind the lens to capture the adorable moment between the new royal and his sibling. The portraits mark the first time Kate and William's children have been seen together. William took George and Charlotte to meet Louis shortly after his birth at St. Mary's Hospital in London, but the toddlers were back at home before the royal couple posed for photos with their newborn outside the Lindo Wing.

The next major event for the royal family is Prince Harry and Meghan Markle's wedding, set for May 19. Although Louis won't be there, we can expect to see photos of George and his sister Charlotte stealing hearts as a pageboy and bridesmaid, respectively. Keep reading to see more cuteness from Louis's first official portraits, then check out our roundup of Charlotte's deliciously adorable portraits over the years.

British Celebrities
James Corden Gave Prince Harry a Tour of LA, and There's a Lot to Unpack — Let's Get Started
by Tori Crowther 23 hours ago