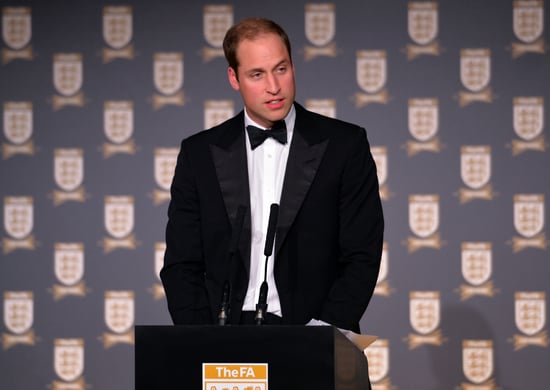 Prince William took the podium at The Football Association's 150th Anniversary Gala Dinner in London on Saturday, just hours after the palace released a new christening portrait of his adorable son, Prince George. As the president of the football association, the Duke of Cambridge gave a short speech during the event, which marked 150 years since the association's founding. Ahead of the dinner, Prince William was asked whether he and Prince George might be seen at Villa Park anytime soon, and he joked, "When Villa thrash Man U at Villa Park, my son will be there." Throughout the night, he mingled with former football players and members of the association, laughing and chatting during his solo night out.

Earlier in October, Prince William brought his passion for the sport to Buckingham Palace, hosting the first-ever match on the palace grounds. At the anniversary dinner, he talked in a video message about asking his grandmother, Queen Elizabeth II, for permission to bring the game to the palace. "She was extremely supportive, but there was a little bit of a sweating moment for me having to ask her, with the possibility that her lawn might turn into a massive quagmire," he said. "It was a little bit awkward, but thankfully the weather held off."