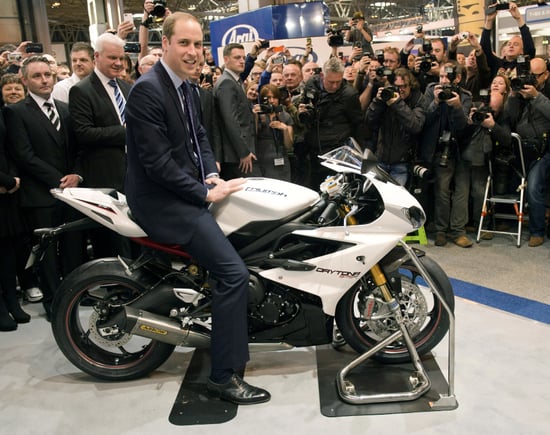 Prince William continued his tour of Birmingham, England, with a visit to Motorcycle Live at the National Exhibition Centre on Saturday. He greeted the group of fellow spectators, including a young girl who, understandably, looked downright enchanted by the prince. During the event, William toured the stands and watched a live motorcycle display before posing for photos while sitting on one of the Triumph Daytona models. He was also presented with a mini motorcycle as a gift for his son, Prince George — do you think it'll be under the Christmas tree this year?

Baby George has been racking up the holiday presents lately. Earlier this week, the little prince was bestowed with a herd of animals — four heifers, a bull, and a goat — by a tribe in Kenya. The bunch will be raised in Lewa, where Will and Kate Middleton took a safari in 2010 (it was also during that trip to Kenya that Prince William popped the question to his now-wife). The present is said to be a very significant honor and blessing from the Samburu community, and Will reached out to thank the tribe in a letter, saying, "Thank you all so very much for the extraordinary honor; I could not be more grateful to you all for this kindness." He added, "It brings me great joy to know George's 'pension' will be herded on a land we care deeply for. We hope one day he will be able to see them for himself."