What's better than one Michael Fassbender? How about multiple Michael Fassbenders playing chess with each other? A few Fassbender clones make appearances is this new viral video for Prometheus, but it's not hot so much as it is creepy. We've already seen a trailer for the film, but this video puts a spin on what we had assumed. In the clip, Fassbender stars as a hyper advanced robot named David, and he's being interviewed about his various skills. In this universe, it appears robots are able to do almost anything a human can do, including understand emotions like sadness and gratitude. 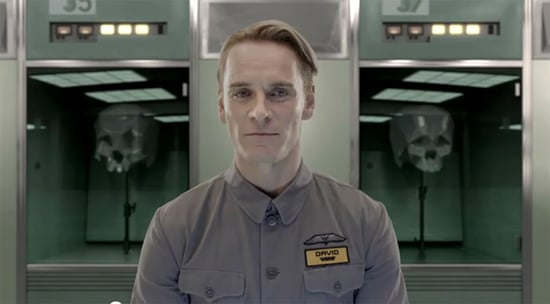 When I saw that first trailer, I assumed Fassbender and his cohorts were of the human species, but now I'm not sure what to think. Are the robots or are these androids from another region? Ridley Scott's Alien franchise seems well suited for viral marketing, and this teaser gives out just enough information to get audiences intrigued. Weyland Industries, the company in the clip, even has its own website to explore. You'll have to wait until June 8 to see the movie, but you can watch the video when you read more.