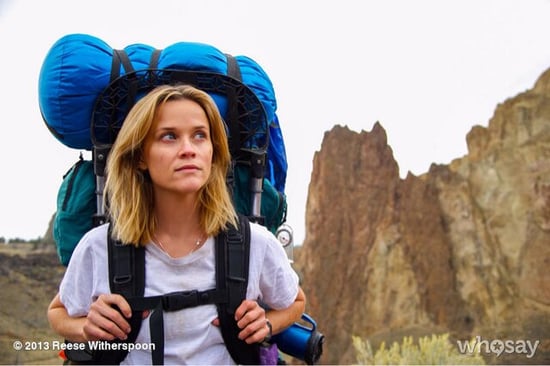 Reese Witherspoon gave us a glimpse of her latest project, Wild, in a series of photos recently posted to her WhoSay account. The actress shared a snap of herself wearing the same hiking boots displayed on the book's cover with the caption, "It's all beginning #WILD." She followed up with a gorgeous photo of the sunset in Oregon — where many of the movie's scenes are being shot — and later posted a picture while in costume and carrying a heavy backpack, saying, "Here's first pic of me as Cheryl Strayed in WILD. So excited to play @cherylstrayed in a movie!"

Earlier this year, Reese signed on to produce the much-anticipated film adaptation and also portray Cheryl, the book's author. The novel follows Cheryl as she hikes the Pacific Crest Trail on an epic journey of self-discovery after losing her mother to cancer (it was also announced this week that Cheryl's mom, Bobbi, will be played by Laura Dern). Cheryl, who has been spending time on the Oregon set with Reese and the rest of the crew, shared the same photo of the actress on her Facebook page, adding, "It's an extraordinary experience to see Reese Witherspoon dressed in the clothes I wore on the trail, her hair the same style and color as mine then, with my beloved/loathed Monster on her back packed just the way I packed it. I'm humbled and awed and so excited for you to see the movie!"