Gus Van Sant's new movie Restless debuted this week at the Cannes Film Festival and while it may not elicit the same visceral reaction from critics as We Need To Talk About Kevin, the sweet indie movie is a treat of its own. The film follows the relationship of Enoch Brae (Henry Hopper), a death-obsessed teen with the ghost of a Japanese kamikaze fighter as his best friend, and Annabel "Annie" Cotton (Mia Wasikowska), a young woman with brain cancer and three months to live. They meet at a funeral he's crashing, which is a hobby of his, and the two quickly fall for each other, quirks and all. She's a naturalist obsessed with water birds, he plays battleship with his ghost friend. The film is set in Portland, and at points veers a bit far into the "twee" category. One montage includes scenes of Annie and Enoch playing badminton and riding fixed gear bikes in old timey clothes and they have a running bit about a xylophone, for example. 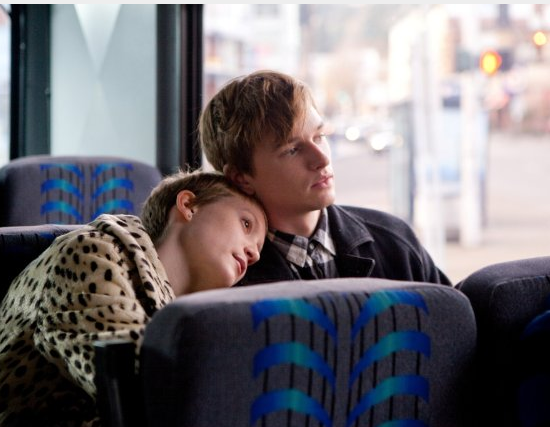 It's also a veritable celebrity kids party between Henry Hopper, son of Dennis, and costar Schuyler Fisk, daughter of Sissy Spacek, as well as producer Bryce Dallas Howard, daughter of Ron. Fisk will always have a place in my heart from the movie Orange County, but she's grown up a lot since then and is touching as Annabel's protective older sister. Also, Hollywood may have a new cute indie heartthrob in the form of Hopper; Restless is the first starring role for the 20-year-old actor, and I could barely take my eyes off his moody looks and perfectly tousled blond hair. Bottom line: it's not a perfect movie by any stretch, but the dialogue is good, Wasikowska and Hooper give wonderful performances, and thankfully the inevitable ending doesn't become an emotionally overwrought mess.