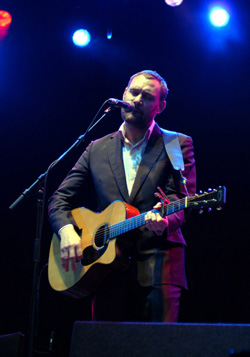 David Gray is touring the country with his Greatest Hits album and I was fortunate enough to catch his show at the Brighton Dome last night. It was an amazing set full of energy, from the acoustic opening numbers including "Shine" and "Babylon", right through to the rousing encore renditions of "Nightblindness" and "Please Forgive Me". His voice is so powerful live, and you can tell that he loves what he does.

The crowd was really up for it, with quite a few wonderful cranks shouting out and dancing like they were really feeling the music. Maybe it's the Brighton Effect, as the audience last night was much livelier than the gig-goers I was with at his Roundhouse performance back in November.

Beth Rowley, whose single "Oh My Life" is released on Monday, was the support act. I think we'll be hearing a lot more from her, as her sound is straight from the Amy Winehouse / Adele / Duffy school of singing, full of emotion and idiosyncrasies.

If you get the chance I totally recommend seeing the man perform live: tickets are still on sale for two of his March dates. It's not just a concert, it's an experience!

Product Reviews
Chanel No. 5-Lovers Rejoice: It's Now Possible For You to Bathe in Your Favourite Fragrance
by Renee Rodriguez 4 weeks ago