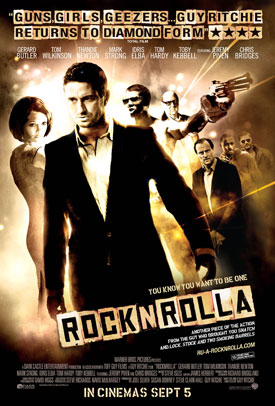 Guy Ritchie has rolled out his tried and tested (and hugely enjoyable) gangster crime caper formula for his latest offering, RocknRolla.

Like Lock Stock and Snatch before, RocknRolla brings the lives of London's criminals together in a funny, well-acted and entertaining action flick.

Throw in a "dead" junkie rock star (Toby Kebbell) and his American agents (Ludacris and Jeremy Piven) and you'll get an idea of the quality of the ensemble cast. There's plenty of eye candy, but it's the kind of film which men and women will enjoy.

To find out more about the movie, and see stills from the film, just read more

It isn't as intricately plotted as the earlier films, but thanks to the stellar cast (who were all in attendance at the world premiere earlier this week) the myriad characters keep you interested. The roles are also more diverse than previous offerings, but this is still a male-dominated film and Thandie Newton has a disappointingly narrow part. Having said that, I don't watch a Guy Ritchie film expecting an exploration of women's psyches, and the relationships between the men provide some welcome surprises.

I chose RocknRolla as one of my September must haves and if you liked Lock Stock and Snatch then I'd definitely recommend it to you. If you're not a fan of those movies then it'd be best to steer clear, as you won't get anything particularly different.

There's a lot riding on RocknRolla for Guy Ritchie, following the critically panned Swept Away and Revolver, and as far as I'm concerned he's proven his filmmaking skills again. Bring on that sequel!