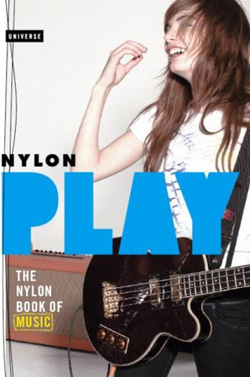 Having covered style and beauty in two previous books, American magazine Nylon has taken on music in their third book, Play. Behind the cool cover there's some fab music-related style and beauty inspiration, as well as interviews and dream mixtapes compiled by some of my favourite current bands and solo artists.

The first section covers "Icons" past and present – from Marianne Faithfull to Amy Winehouse, with The Slits, Missy Elliott, Kim Gordon, Kylie and many more in between. Bright colours and iconic images blast out from the pages alongside brief bios, track recommendations, and style touches that you can recreate in your own wardrobe. So. Much. Fun!

Section two is all about "Influences", with interviews featuring artists such as Jenny Lewis (Rilo Kiley), Bat For Lashes and Keren Ann. They're fascinating and fun insights into these women as they talk about their inspiration, experiences and advice for aspiring musicians.

The third section – "Mixtapes" – is my favourite, where some more fab musicians compile a list of their 8-12 favourite tracks ever. Thurston Moore, The Like, Kate Nash and The Go! Team feature with lists of tracks that are sometimes familiar and sometimes surprising.

To read the rest of my thoughts, plus why you could be featured in the book(!), just read more

The last couple of sections are fun, with illustrators and musicians dreaming up their perfect concerts and designing some awesome posters for them, and a wealth of pages featuring "Fan Style". Check them out – if you've been photographed at Glastonbury or the Tales Of The Jackalope festival in the UK you might just be featured!

The paperback closes with a list of record shops in London and across the States that will come in handy when travelling. Play's journey of (mostly) female icons in music travels from those singing on LPs, to evocative, nostalgia-filled cassettes of my childhood through to ever-present downloads. The female focus reminds us that there are tons of great women out there making music and will lead you to listen to vintage bands and singers that you haven't already sought out.

Including such a mix of musical icons really marked this book out for me from the numerous tomes there are on the subject, it's a great book to have on hand to flick through when you're looking for some iTunes inspiration!

You can buy Play online here.