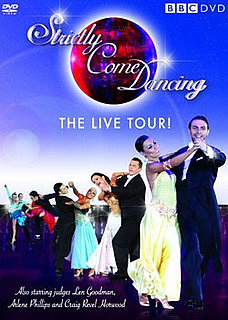 Eight celebrities from the first five series took to the road at the beginning of the year, and performed 40 live shows in front of thousands of adoring fans. I was lucky enough to catch one of their London dates and boy was it a fun show! This DVD brings the glitz and the glamour of the ballroom straight to your living room.

A pregnant Kate Thornton does a pretty good job taking over hosting duties from Bruce Forsyth and Tess Daly, and while just three judges made it on tour, Len is on top form and more than makes up for Bruno's absence.

To find out what celebs and extras appear on the DVD, just read more.

The standard of dancing is very high, so those of you who love to watch the hopeless contestants will have to make do with Series One runner up Chris Parker and his hugely entertaining Paso Doble. Fellow Eastenders alumni Letitia Dean, Matt Di Angelo and Louisa Lytton also toured, and were joined by Zoe Ball, James Martin, Denise Lewis and Series Three winner Darren Gough.

Together with their professional dance partners, the gang bring all the fun of the TV series to the arena, from the gorgeous costumes to the judges' comments and scores. You won't be able to vote on this one, but a champion is crowned, after the arena's audience votes are tallied with the judges' leader board.

The couples all perform a Latin and a ballroom routine, and there are group dances to savour too. Len Goodman, Arlene Philips and Craig Revel Horwood are as funny as ever with their spats and comments, and the pace is even faster than the TV show. This might not be the kind of DVD you'll watch again and again, but it's a great addition to any Strictly fan's collection.

Bonus features include a "Behind the Scenes" documentary, which is pretty revealing about just how competitive, and nervous, the stars on tour are.

Strictly Come Dancing: The Live Tour is released by 2 Entertain on Mon. 10 Nov.