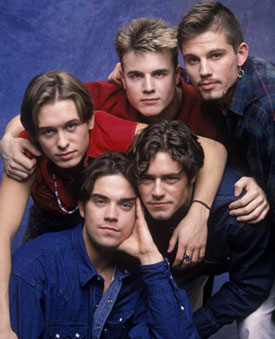 Robbie Williams has filmed an appearance on Friday Night with Jonathan Ross and said that there definitely are plans for him to work with the Take That boys in the future. He also showed off the Take That symbol tattoo he got when he saw the boys — at the Electric Proms he said Gary, Jason, Howard and Mark shook their heads at him when they saw it!

Regarding the reunion, Robbie said:

"We've got together, done bits and bobs. I can't say much."

In the interview with Jonathan, Robbie also talked about his girlfriend Ayda Field, being broody and the stage fright that he says has got worse as he's got older — it airs on BBC1 at 10.35pm tomorrow. Robbie will also appear live on daytime chat show Loose Women on Monday.

If you want a preview of his album, all of the songs will be available to stream on Spotify tomorrow, and there are new tracks to listen to each day at his official website. Once you've listened, let me know what you think of his new material!