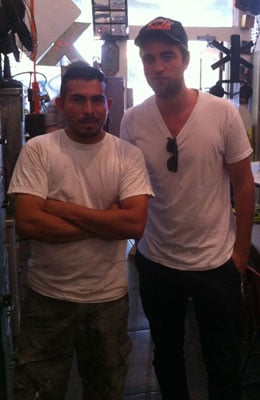 Robert Pattinson continued his week in LA yesterday with a little retail therapy at T.I.N.I — aka This Is Not Ikea — on La Brea Boulevard. According to fellow shoppers, Rob and a guy friend spent more than two hours browsing the vintage furniture store before Rob spent a little more than $500 on two lamps and a green, wooden bench. A "very friendly" Rob was also overheard telling staffers that he was buying the pieces to furnish his own place, and he willingly posed for a few photos before he left. Kristen Stewart, who's been making the rounds at London Fashion Week in recent days, wasn't along for the shopping trip. Instead, Kristen claimed a front-row seat next to Kate Moss at the Mulberry show on Sunday and hit up the brand's afterparty later that night. Kristen and Rob will both be in LA in mid-November, though, for Breaking Dawn's world premiere.