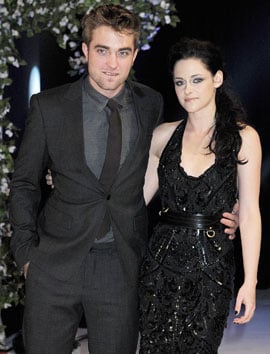 Robert Pattinson and Kristen Stewart didn't attend Sunday's Oscars, but according to a new story, nonetheless spent the weekend together in LA. People reports that Robert and Kristen showed PDA at a pre-Academy Awards bash. The WME agency's Grey Goose-hosted party was held at the home of überagent Ari Emanuel, and brought out their fellow hot couple Miley Cyrus and Liam Hemsworth.

Their weekend started with a stint shopping at Balenciaga for Kristen. Robert and Kristen also made time for dinner with friends. They were seen at Il Covo dining with a group of pals that included Mia Wasikowska.