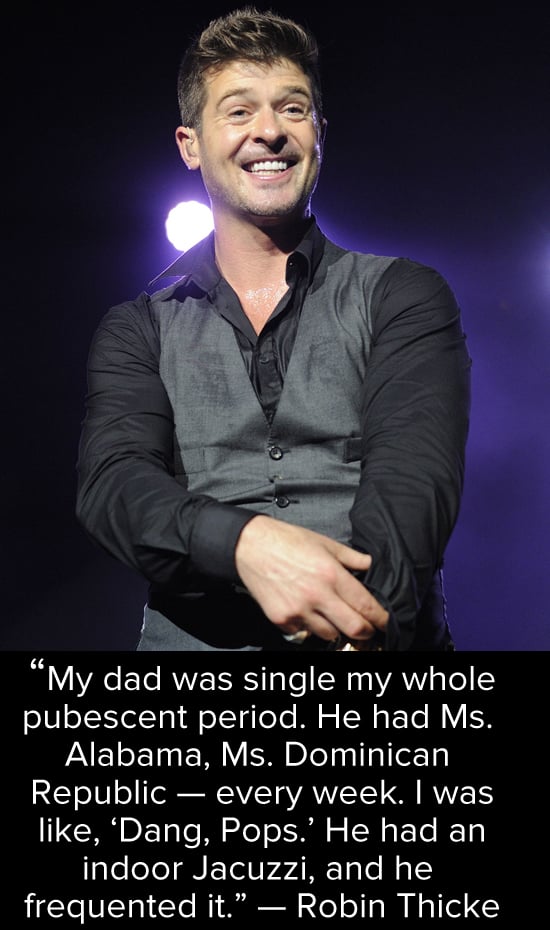 Sounds like Robin Thicke's dad, Alan Thicke, was quite the ladies' man back in the day. In Elle's November issue, the singer dished on his dad's single days, saying that the Growing Pains star regularly brought women back to their house to spend time in his indoor Jacuzzi. Apparently it led to some surprising moments for Robin, who said, "The first time I saw a naked woman was when I went to take a shower one morning before school. I was like, 'Who is this girl in my shower?'"

Robin laughed about it, saying that his dad passed on plenty of advice about women. "He was always very intuitive," Robin said. "And very smooth. He didn't really tell me what to do. He told me what not to do, which is actually more important." So what exactly did Alan's advice entail? "We were on vacation, and some pretty girl walked by. I started ogling her like a 12-year-old boy, and he said, 'I know she's pretty, but you stared at her and followed her across the room. What if there's a prettier girl sitting two tables away? Now she's not going to feel special. She'll say, 'You look at all the girls like that.' You've gotta play it cool, so you don't look like you're desperate.'"