It was just a week ago that Coleen and Wayne Rooney got back from their holiday in the Caribbean, and now they've flown off to St Tropez for even more sun and relaxation! Coleen's pregnancy is reaching six months soon, and she looked gorgeous in her body skimming loose printed dress as she walked with Wayne and their friends. In an interview with The Times Wayne has stated that he believes that he can fill Cristiano Ronaldo’s shoes within Manchester United when Ronaldo moves to Real Madrid, and Carlos Tevez leaves for Man City. Wayne said: 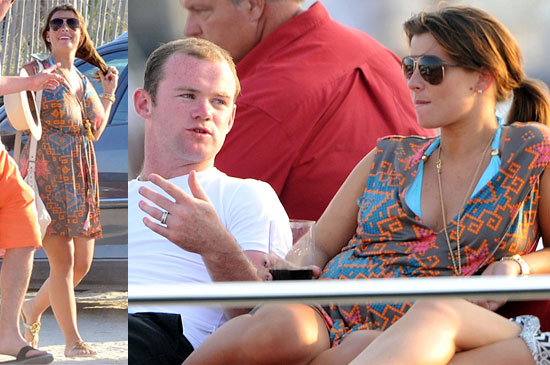 "We’ve lost two key players and obviously I hope we can get a few players in. Between them Cristiano and Carlos scored a lot of goals for us last season and the season before, but I would like to think I’m capable of filling that gap. I’ve said before that, if I can play in my right position, I’m capable of doing that. I want to play in the position where I feel I’m best. A lot of people think I’m best as a centre forward. To play in a Champions League final and to play week in, week out for Manchester United is a privilege and it’s something I’m very lucky to be doing, but I don’t think playing on the wing I can express myself as much as I like to.”

With all the rest and relaxation he's getting, he should be on top form to prove to Sir Alex Ferguson that he should play in the position that he wants to!