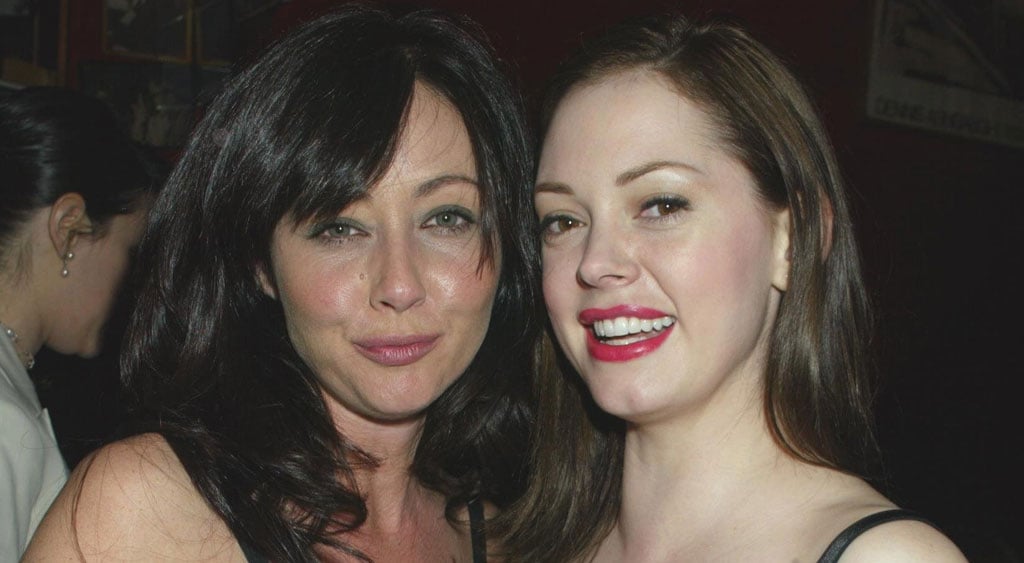 In February 2015, Shannen Doherty revealed that she'd been diagnosed with breast cancer. Since then, the 45-year-old actress, who rose to fame in the '90s and 2000s on shows like Charmed and Beverly Hills, 90210, hasn't tried to hide her battle with the disease. She shaved her head on Instagram in July and recently attended a Stand Up to Cancer event looking incredibly strong.

Amid news of her cancer diagnosis, an unexpected supporter has reached out: Rose McGowan. When Shannen left Charmed after three seasons in 2001 amid whispers of her difficult behaviour on set, Rose was cast as her replacement. Rumours of a feud between the two actresses began spreading through Hollywood almost immediately after the news broke, creating a perceived media-fuelled rivalry, which Rose squashed in the powerful, heartfelt letter she wrote to Shannen on Instagram, accompanied by a photo of cartoon versions of the two with bald heads.

"Dear @theshando Someone made this of us & I wanted to share it with you as it made me reflect. We have a funny history. As young women we were pitted against each other for society's pleasure. The rules of Hollywood engagement brainwashed into us were truly vile. The men & brainwashed women in our business made it so we couldn't be friends, I regret that. We were cast in this weird fake reality show where we were supposed to be enemies. I resented it greatly. I regret not being awake enough to articulate this to you at the time. Fear was drilled into me from day one in this town & you were the barometer by which my behavior was judged. I was under a microscope, one false move and I'd be branded 'difficult' just like you. I think we all know what happens when girls here get out of line. I willfully remained enigmatic & unengaged. The Bad Girl Shaming you received at the hands of the media was merciless. Global media shaming is real AF, as you know. Fuck them all & their machine, too. You cast a long shadow over my life. We were both cast in a fake real life role, that of the Bad Girl. I had to prove I wasn't as bad as you or I'd get the axe, too. But we were never the bad ones, it was them., the Beige Brained White Dudes in Charge. Well fuck them. Damn them for fucking with our minds & careers just because their misogynistic belief systems couldn't sanction two strong females in a traditionally subservient role- actress. I refused to give them the cat fight they so wanted. Shannen, we didn't know it yet, but we were the good ones. Two boss young women that scared the 'faux-liberals in provincial Hollywood, for that sin we got burned at the media stake, egged on by Hollywood who believe the press they start. There was a strongly inferred threat of me being blacklisted in tv as I'd been in film. Instead of understanding that we were a different breed, they tried to crush us, but they couldn't. I send you strength. ⚒🛡#rosearmy #BRAVE #shannendoherty #typos4life"