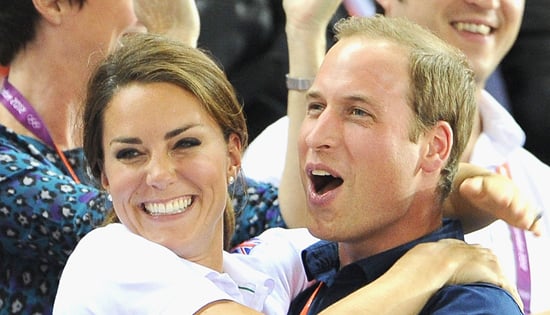 Following the royal baby's birth, Prince William said in a statement released yesterday, "We could not be happier." And ahead of their return home today, the Duke and Duchess of Cambridge released a statement thanking the hospital staff, saying, “We would like to thank the staff at the Lindo Wing and the whole hospital for the tremendous care the three of us have received. We know it has been a very busy period for the hospital and we would like to thank everyone — staff, patients and visitors — for their understanding during this time.”

William's father, Prince Charles, also released a statement to express his excitement yesterday: "Both my wife and I are overjoyed at the arrival of my first grandchild," he said. "It is an incredibly special moment for William and Catherine and we are so thrilled for them on the birth of their baby boy. Grandparenthood is a unique moment in anyone’s life, as countless kind people have told me in recent months, so I am enormously proud and happy to be a grandfather for the first time and we are eagerly looking forward to seeing the baby in the near future."

The queen also tweeted a statement upon the birth:

Recognizing the momentous occasion, British Prime Minister David Cameron also chimed in, saying, "It is an important moment in the life of our nation, but I suppose above all it's a wonderful moment for a warm and loving couple who got a brand new baby boy."

The Prince of Cambridge is officially the third in line to the throne behind Prince Charles and Prince William. If you're not familiar with the British monarchy, you can get to know the royal baby's family tree to learn more about the future heir's family.