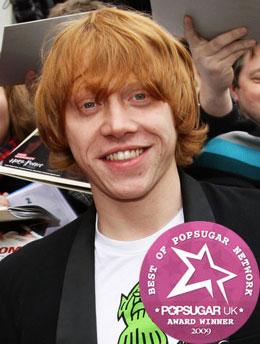 Here it is, your final Best of 2009 poll result, and this one's been a closely fought battle!

I've dedicated a lot of posts this year to the amazing British actors out there at the moment so I asked you who your favourite is! While New Moon's Robert Pattinson took an early lead, all you fans of Rupert Grint started to show your support for the Harry Potter actor and he took the top spot with 51% to Rob's 36%!

While Rob's been pretty ubiquitous thanks to his filming of Eclipse and the release of New Moon, lovely Rupert's definitely not had a quiet year. We got our first look at Rupert's performance in Cherrybomb when it premiered at the Belfast Film Festival, he promoted Harry Potter and the Half-Blood Prince and also suffered and recovered from Swine Flu just before the UK premiere! He got hit with the illness as he was filming Harry Potter and the Deathly Hallows, missing a week on set, and we got our first glance at the movie earlier this month!

A big thanks to all of you who took the time to vote: it's been so much fun finding out who you've selected as your 2009 favourites.