I was a huge fan of Judd Apatow's TV series Freaks and Geeks, so when I heard that he and one of the series' stars – Jason Segel – were getting together to write and film the comedy Forgetting Sarah Marshall, I was so excited. 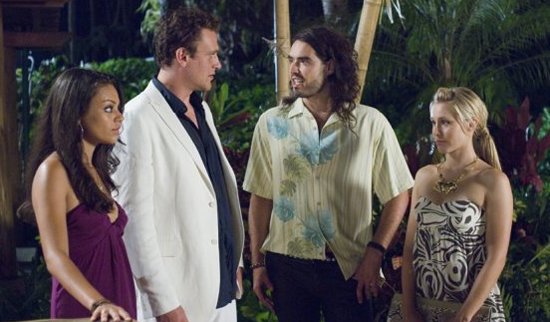 The cast also includes Jonah Hill (Superbad), Kristen Bell (Heroes), Mila Kunis (That 70s Show) and our very own Russell Brand in a pretty major role. Russell plays Aldous, a British rock star who steals TV star Sarah (Bell) away from Peter (Segel). Peter then flies to Hawaii in the depths of despair to try and get over her, but of course she's there with Aldous. I went to see a preview of the film last week (it's not out until 25 April) and it was really enjoyable – there's a couple of forced, juvenile jokes like the one at the end of the trailer under the cut, but for the most part I really liked it – Russell Brand is really funny.

To check out the trailer, just read more