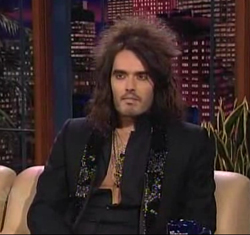 Good old Russell Brand has been promoting his movie Forgetting Sarah Marshall over on US soil, and he had his first American chat show appearance on Jay Leno's show this week.

When I first watched it I almost cried laughing as Russell rambled his way through an eccentric discussion about hats, the differences between his character and his real persona, being a sexy vegetarian, food in LA and his Mum. And all the while he managed to be incredibly charming yet incredibly dirty.