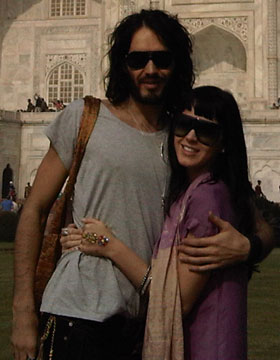 So, will we see Russell Brand and Katy Perry walk down the aisle in 2010? According to The Sun today, it seems so — as Russell apparently confirmed his engagement to Katy via text message.

The four word text — "It's true. Much love" — was sent by Russell as he continues on the couple's holiday which has seen them posing in front of the Taj Mahal in India, and seems to confirm other reports!

Russell apparently asked Katy to marry him during a spiritual ceremony on New Year's Eve in Jaipur, where the couple were blessed. Russell was spotted out ring shopping before he and Katy embarked on their trip! They are reportedly in Thailand now, and the holiday was Russell's Christmas present to Katy.

So what do you think — are the couple engaged, or playing with the press? If it's true, are you happy for them? They've only been together for a few months, but I love this couple. Let me know!