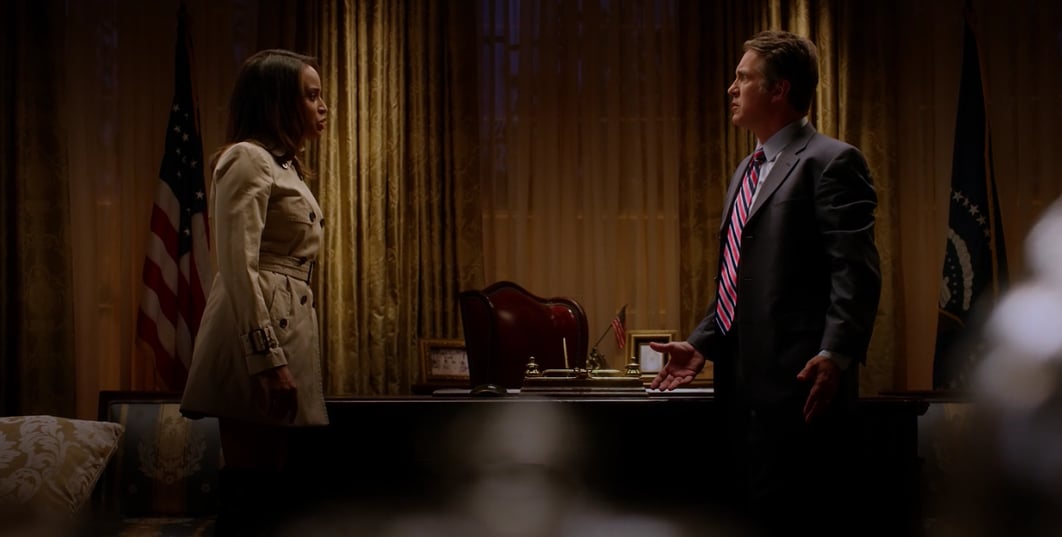 You don't have to look too hard to find a reason to love Netflix's Dear White People. It's sharp, incisive, hilarious, and, above all, necessary storytelling. If reading my previous sentence made you think, "Hmm, no, that still doesn't sound like something I'd like to watch," then might I suggest you reassess your life? Once you've finished doing that, you'll be ready to enjoy Defamation, Dear White People's show within a show and spot-on parody of Scandal. I don't want to sound too crazy here, but it might even be better than Dear White People itself (OK it's not, but it comes close).

We're first introduced to faux-Olivia Pope when Winchester University student Sam (Logan Browning) brings her boyfriend, Gabe (John Patrick Amedori), to her dorm's weekly viewing party for the show. It's immediately clear Defamation has all the classic signs of an episode of Scandal: a confident black woman dressed in a trench coat dressing down a president, who happens to be white and also her secret lover (sound familiar?). It includes classic lines like, "You're the leader of the free world; you don't get to fall in love," and "I'm in love with my job, which is to get little b*tch babies like you to act like grown-ass men when the world needs them to do their job." Oh, and there's also a scene featuring a blow job in the Oval Office, along with this piece of dialogue that might be the best or worst thing of all time: "Mr. President, I pledge allegiance to your c*ck."

Dear White People creator Justin Simien recently assured BuzzFeed that the parody was done with the utmost respect for Scandal and showrunner Shonda Rhimes. "I don't know how Shonda is going to take that, but it's done with so much love," he said. "All of us are obsessed with this show about an interracial relationship, but no one comments on that aspect of the show because she's such a badass. It's a very weird and interesting part of us."

From over-the-top storylines (faux-Olivia's father is a clone who works undercover for the CIA because her real father suffered an untimely death, which is something I can honestly see happening on Scandal) to the credits (see below), it nails everything. A second season of Dear White People has yet to be announced, but for the sake of Defamation (and Simien's downright brilliant first season), please make it happen, Netflix.