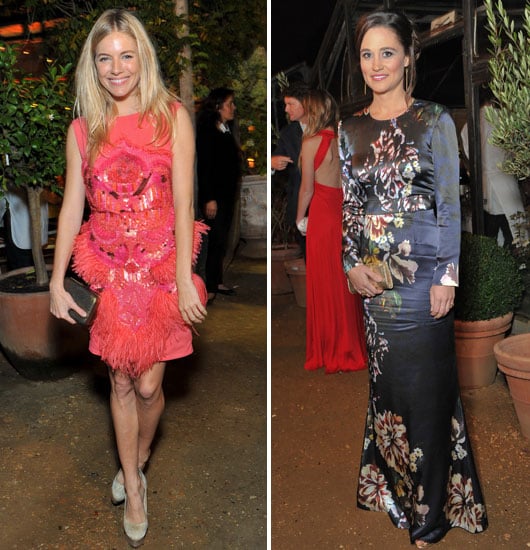 Sienna Miller and Pippa Middleton Get Glamorous For Charity

Sienna Miller chose a bright pink dress to attend a charity event in England today. She was joined by her pregnant sister, Savannah, Pippa Middleton, and Poppy Delevigne for the dinner, which was thrown by All Saints in support of the Too Many Women organization. Sienna and Savannah's mom, Jo, went along too on what was apparently her birthday! Savannah tweeted that Jo had a memorable run-in with Rolling Stone Ronnie Wood. She wrote, "Ronnie Wood just snogged mum happy birthday. Lifetime achievement award goes to. . . Mum hands down. She's grinning like a Cheshire cat!" It was a stylish evening with Pippa in a floral Project D dress from Danni Minogue's line. Danni also outfitted Pippa for a recent wedding with Kate and Prince William. Pippa made the appearance following a similarly glamorous outing to the Boodles Boxing Ball earlier this month alongside Princesses Beatrice and Eugenie. Prince William's cousins weren't on hand for this event, but their mom, Sarah Ferguson, represented the family in a dark dress.