Now this is the main Skins ep I've been looking forward to. It's no secret that Chris is my favourite character in the show and Joe Dempsie plays him brilliantly. So lets begin... It was going to happen eventually – Chris is kicked out of college and so he can no longer live in his student flat. Needless to say that this isn't good, but permanently rose-tinted-glasses-wearing Chris doesn't really get the gravity of the situation. Jal wakes him up and makes a deal that she'll start saying "Yes" more often, if he stops saying "F**k it" and giving up. 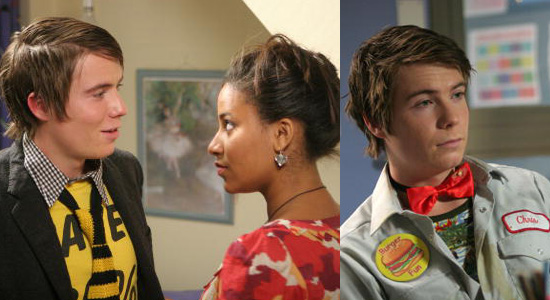 Next he goes to a slightly loopy and swearing-averse careers advisor and goes through a bundle of jobs in a really amusing montage, eventually kind-of getting the hang of not cursing by putting a P at the beginning of every swear-word. Which was very funny. When he meets up with the guys, (Anwar now has Maxxie's fringe, obviously under the guidance of mental-Sketch) he notices the 'Tony, Sid and Michelle problem', showing he (like Cassie) notices things no-one thinks he does.

We also saw the fallout of Sid and Michelle being together – Cassie got really angry and slapped Sid. Hard. Poor Cassie. So now the rest of the group know what's going on there, and Jal feels left out by her 'best friend' Michelle not telling her. Chris, being the lovely guy he is, takes her out of the party to talk and calm down. And...

For more of my thoughts / recap, just read more

...they kiss!! Hurrah! It was clear something was going to happen between them, and I'm pretty behind this pairing. What do you think of them as a couple?

Anyway, so Chris needs to get a permanent job. He goes to an interview and is asked to "sell me this cup of tea". This was definitely a highlight of the episode, where Chris sets fire to his interviewer's tie so that he needs the tea to put out the fire – genius! He gets the Estate Agent position, and has one of the most annoying co-workers ever (we've all been there in the past). Chris's 'work outfit' is sweet, with those massive bright shoes sticking out of his trousers, and wearing his scarf fashioned into a tie. He's assigned to show the worst flat ever to potential buyers... and seeing as he doesn't think he'll sell it, he decides to move in.

After all his hard work Jal rewards him, and they cement their new relationship in his new (but un-paid-for) flat. How long until all this blows up in his face? Aha! Cassie arrives. She's gone slightly mad due to the Michelle/Sid thing, and couples being all around. Obviously the new Jal/Chris pairing does not cheer her up.

Chris and Jal have a big in-depth chat where Chris filled her in a little more on his sad back-story. He used to escape as a kid by reading "The Hungry Caterpillar" over and over inside his bedcovers (incidentally, what an excellent book...). His lack of progress in his job is getting too much for him, and Jal counters his opinion ("Chris, you're not a f**k-up"), giving him the advice to try and sell the house he used to imagine living in when he was little. And he gets good at his job... finally!

Oh no. Then Angie arrives. She's back! With a bob. And flirting incessantly with him. Chris is being pretty good though (for Chris) and confesses to his careers advisor over the phone the effect Angie has on him. Of course the careers advisor has him on speaker phone and Cassie is there. Ohhhhh dear. Of course crazy Cassie tells Jal (because she's crazy, trying to wreck everything, taking cocaine... ) and throws a housewarming party for Chris.

Another very amusing moment came up next, where Anwar revealed he now not only has the Maxxie-fringe, but blonde hair too, and looks much like his blonde buddy in his new cardi. Their faces when they were looking in the mirror together were priceless! Meanwhile Jal won't answer Chris's calls, so Chris (using Chris-logic) has sex with Angie, but stops. Jal arrives at the party halfway through and realises he was with Angie in the bathroom as his shirt's inside out, so she leaves again. This is exhausting!

Predictably, Chris gets fired as he was living in that tiny flat without permission and trashed it. Then he and Cassie have a heart to heart... a rather dark heart to heart.

Elsewhere, Tony's re-learning to swim with his dad in a childrens class. Chris goes to see him, which seems to put everything in perspective. Oh, and Jal's pregnant. But the main problem (aka Angie) is leaving, and lets Chris stay in her flat. Chris invites Jal to his new flat and tried to explain why he thinks he messes everything up for himself. "It's easy when you've got nothing, 'cos nothing can be taken away from you."

And the thought I'll end this ep with is – Chris loves Jal. Hurrah!

That was such a great episode. I'm not loving insane Cassie though, so I hope that gets sorted fairly sharpish, and I hope Sketch... stops being so sketchy. What did you think? Do you love Chris as much as I do? And how's the Jal pregnancy thing going to work out? There's not many episodes to go now...