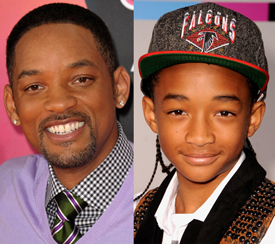 Will and Jaden Smith are about to make their next film a family affair: they have signed on to costar in a science fiction action adventure film, which will be directed by M. Night Shyamalan. The father-son pair will play father and son in the film too, which will be set in the future. Jaden's character is that of a young boy exploring an abandoned planet in a spaceship his estranged father (Will) is also on. The last time the Smiths costarred was in 2006's The Pursuit of Happyness.