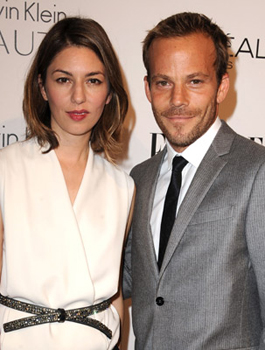 Sofia Coppola's film Somewhere debuts this week, with Stephen Dorff in the starring role as hard-partying actor Johnny Marco. As a resident of Hollywood hotel Chateau Marmont, Johnny's life is changed by the quality time he spends with his young daughter (Elle Fanning). The director and star recently talked about the experience of making the quiet, introspective film and what it meant to them. For more on Somewhere, check out my video interview with Dorff.

Did you base Johnny on anyone?
Sofia Coppola: Oh, a lot of people. I have definitely met a lot of actors who have lived at the Chateau Marmont; he's lived there [indicating Stephen]. It's a combination of people I've met and stories I've heard, kind of all put together.

The themes are similar to Lost in Translation; is this a continuation of sorts?
SC: I feel like all my movies are a continuation of similar themes but I think this movie is the most closely linked with that one because they're both original screenplays. They're the most personal to me even though I try to connect personally with everything I work on.

How did you go about choosing the music?
SC: Because the story is contemporary, I wanted to pick music of the time, and also I wanted to pick music that's believable that the characters would pick. So when the little girl is ice skating, I thought it's believable that she would be listening to a Gwen Stefani song. They also have to fit the right mood to the scene. Phoenix did the score, which is kind of the minimal, more abstract stuff in between.

To read the rest of the interview, just read more.

Did you set out to make Johnny likable?
SC: When I wrote the character I wanted to be empathetic and put myself in his shoes to try to understand what it's like for him. Part of casting Stephen was that I knew that he's a genuine, sweet guy, and that'll come through in the character. Because he is so flawed, it'd be easy to not be interested in wanting to watch that guy, unless someone's real heart came through.

Is it easier or more authentic to set a movie in Hollywood?
SC: For me, he could be [in] any profession. It's not so much about him working as an actor; I just set in that world because it's entertaining, and also it's a world that's familiar to me, [and] I try to write about something I feel like I know enough about. But I feel like the themes are universal, and anyone can relate to the journey that he's on and the choices he has to make in life.

What makes a movie a Sofia Coppola movie?
SC: It's hard for me to say. I just try to put my personality and my tastes and the things that I find touching or funny or sweet. I guess that would be my only parameters for what I'd want to see or what feels right to me. It's intuitive.

How was it working with a minimum of dialogue?
Stephen Dorff: I found this movie to be the most challenging as an actor that I've ever had. Most movies, things are oversaid, there's a lot of words, there's explosions going around, robbing banks, Johnny Depp doing this, dressing up as a woman. But I felt that this was the most naked, the most raw as a behavioral part. It's about kind of finding an unconscious space; if I'd acted any beat where it felt like I was acting it just wouldn't have worked. I think it would have unraveled what Sofia was trying to do in her film. So my challenge was try to go with my captain. There were parts of me sometimes I would get stuck — I thought maybe he should be more irritable at times, and she said, "No, I don't see him that way, I think he should be sweet all the time." Even when he's exhausted, [like with] the dancers, the strippers, he's still polite enough to give them their applause. He's still sweet to the valet parker, Ray, who's worked at the Chateau for 18 years. Every time I got stuck, it was me as an actor kind of getting stuck. I think that's why we need a director to rein us in, guide us. I was so thrilled on this one to be able to fully trust my director, and to find myself being wrong sometimes. In looking back now, seeing the film for the first time many months ago I realized that some of those few scenes popped up where I got stuck and I thought, God you know, Sofia was right all the time.

You lost your mother a year before you landed the role. Did that affect your performance?
SD: The whole experience felt different than normal. As an actor if you get a movie like this it's a big deal in the business sense. I didn't feel any of that this time, I felt it was much deeper because I went through a huge loss. I almost felt in a way the synergy of maybe the timing when Sofia was writing, thinking about me for whatever reason, I popped into her head. It almost felt like a savior, this movie, because I felt like it helped me. It also came at a time where I needed a part like this, I need a part to show a different side. I was ready to play a part like this, I think, because I grew up in a lot of ways in my life by losing my mom. I was really empty inside; so this was an incredible thing that made me smile, made me happy. Not only was I ready to embrace this role the way Sofia embraced me, it just happened at the perfect time. It also was a role I think my mom would have been really happy to see me play. She was always scared of my walking out of premieres of my movies. She'd always say, "Why are you always such a bad guy?"

Did the experience feel more special?
SD: It was a very meaningful thing, and I think my mom is with me and was with me throughout this, so I'm really thankful for this last year and a half, two years, from Sofia. Everything has been really special to me beyond just, "Wow, I got a great movie." It's a lot deeper than that for me. As far as the emotion, there was only one time where Sofia mentioned my mom to me, which was the ending, the last shot of the movie, when I smiled. It was weird, I'd never heard her say anything [about my mom] but I remember her saying something to me, which just hit me real hard.