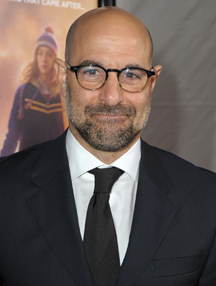 May the odds be ever in his favor! Stanley Tucci has been cast in The Hunger Games as Caesar Flickerman, the longtime host of the Games. Flickerman also serves as the charismatic interviewer of the players, so he has a lot of action with main characters Katniss and Peeta (Jennifer Lawrence and Josh Hutcherson).

Along with Elizabeth Banks, Tucci is one of the bigger names to become attached to the film adaptation of Suzanne Collins's book. For those unfamiliar with the plot, the story is set in a post-apocalyptic future in which the country's teens are forced to fight to the death in order to entertain the citizens.