Tonight, Living brings us the UK premiere of a TV show based on a Candace Bushnell novel that's not Sex and The City. It's called Lipstick Jungle, and it's about three high-powered female executives juggling their careers and families in — where else? — New York. Brooke Shields plays Wendy, a likable movie executive, Kim Raver plays Nico, a top fashion magazine editor, and Lindsay Price plays fashion designer Victory. 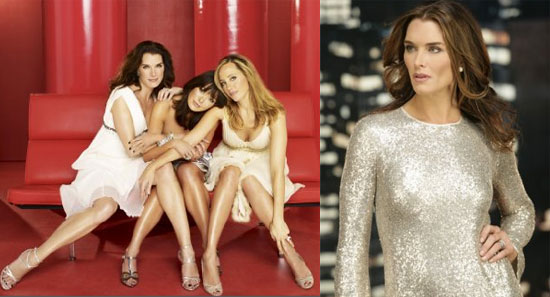 Lipstick Jungle was one of two very similar female-friendship focused TV shows that began in the States earlier this year — the other was Lucy Liu vehicle Cashmere Mafia, which was canceled — but this series has been commissioned for a second run. I've watched the first episode, and I enjoyed it, although sure, it's not Sex and The City. I liked Shields in her role, although I'm not so sure about Price at this stage. Also, kudos for casting 80s heartthrob Andrew McCarthy. Anyway, I'll give you more detailed thoughts tomorrow, after you've had a chance to watch — and I'm told by my American colleagues that the show improves as it progresses and we get to know the characters.

It starts tonight at 10pm in the UK on Living, and I look forward to reading your thoughts tomorrow when I post my recap. Remember we still have a few days left of my Top Talker competition for September!

If you'd like to see an American trailer for the series, just read more.