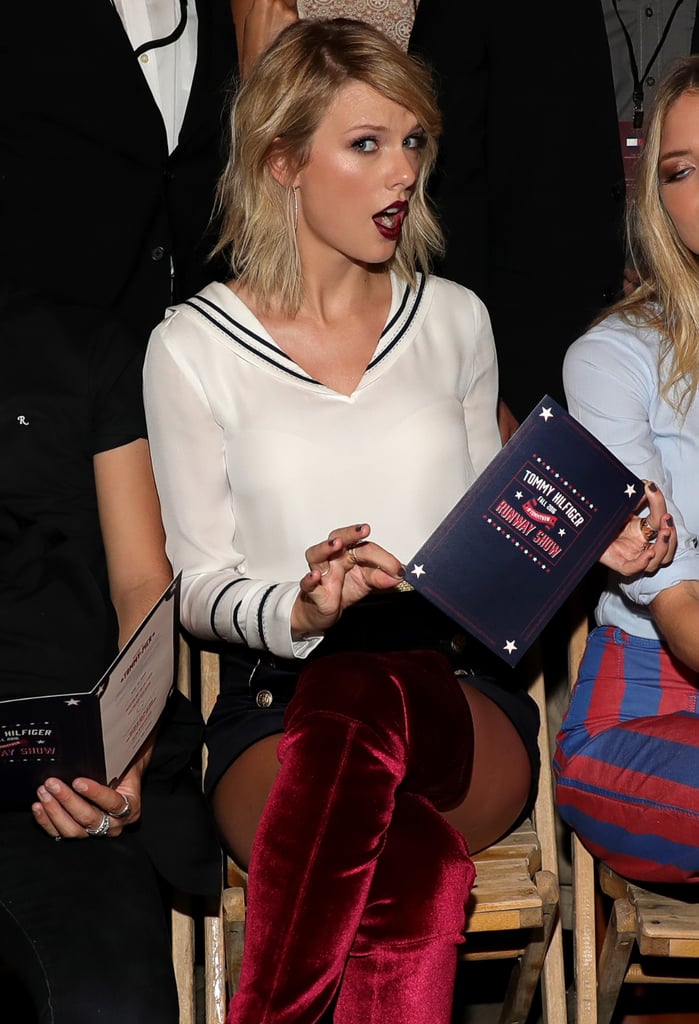 Taylor Swift stepped out with model Martha Hunt for Tommy Hilfiger's fashion show at Pier 16 in NYC on Friday. The duo was front and centre to cheer on their pal, Gigi Hadid, as she strutted her stuff on the runway and modelled her own collection with the designer. In addition to making her first public appearance since her split from Tom Hiddleston and posing for pictures with Gigi's mum, Yolanda Hadid, Lewis Hamilton, and Tommy and Dee Hilfiger, Taylor took to Instagram to congratulate Gigi on the success of her show, writing, "SO PROUD OF YOU GIGI!!!! That show was INSANE. Congrats to Gi, Tommy, and all the girls who just owned that runway!!" Along with the sweet note, the "Bad Blood" singer shared a video of herself singing along to ex-boyfriend Calvin Harris's "This Is What You Came For."

In July, it was revealed that the track was secretly written by Taylor under the pseudonym Nils Sjoberg when she was dating Calvin, and at the VMAs the following month, the DJ did not thank her during his pretaped acceptance speech. Most recently, Calvin opened up about his complicated breakup with Taylor, telling GQ magazine, "The aftermath of the relationship was way more heavily publicised than the relationship itself. When we were together, we were very careful for it not to be a media circus. She respected my feelings in that sense . . . But when it ended, all hell broke loose." So we ask you: was this Taylor's response to Calvin's recent quotes?

Taylor Swift
Taylor Swift Responds to Plagiarism Lawsuit: "The Lyrics to 'Shake It Off' Were Written Entirely by Me"
by Eden Arielle Gordon 1 day ago