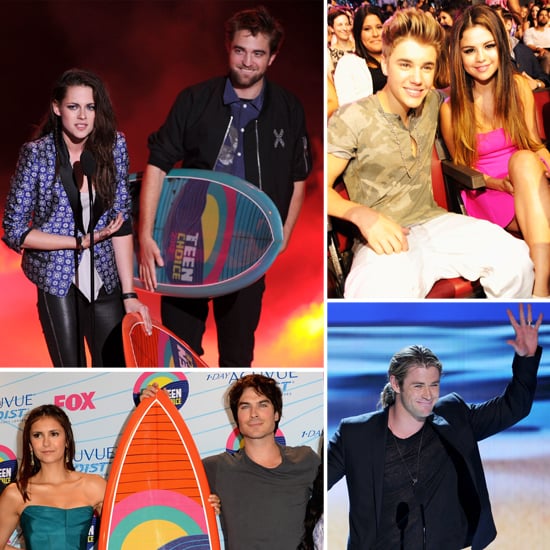 Demi Lovato and Kevin McHale opened the Teen Choice Awards yesterday as the evening's hosts. She was treated to greetings from her fellow X Factor judges Britney Spears and Simon Cowell before the first presenters, Selena Gomez and Zooey Deschanel, handed off the choice comedian to Ellen DeGeneres. Choice sci-fi TV series went to The Vampire Diaries, and the cast of choice TV drama Pretty Little Liars handed off movie actor to The Lucky One's Zac Efron. Ian Somerhalder and an absentee Miley Cyrus took home choice male and female hottie nods, respectively. Ian sent thanks to Miley's parents, Tish and Billy Ray Cyrus, on her behalf. Other absentee honors went to The Hunger Games's choice male scene stealer Liam Hemsworth and choice actress in a sci-fi movie Jennifer Lawrence. Emma Stone received two prizes for Crazy Stupid Love and The Help, Rihanna got love for Battleship, and One Direction had their boards airmailed to London.

Birthday girl Selena, who's newly 20, won choice music group for Selena Gomez & the Scene. Winning a surfboard was for Selena "the best birthday present ever," and things only got better when the crowd sang "Happy Birthday" for her. Jonah Hill made a cameo to accept a surfboard for 21 Jump Street, and Taylor Swift took the stage to accept choice female artist. The Twilight gang of Robert Pattinson, Kristen Stewart, and Taylor Lautner accepted the ultimate choice prize for Breaking Dawn Part 1, and Rob even passed his surfboard into the crowd! To wrap things up, Justin Bieber performed a medley of his songs from Believe. The last honor went to choice Summer male movie star Chris Hemsworth, for both Snow White & The Huntsman and The Avengers. It was a big evening for young Hollywood — make sure to catch up on all the Teen Choice Awards fashion!