Tina Fey stopped by the "Summer Edition" of Saturday Night Live's Weekend Update on Aug. 17 to speak out against the deadly events in Charlottesville, and she gave us exactly the kind of real talk we've been aching for — and a brand new movement we can all get behind.

Fey condemned "Donny John" Trump's reluctance to address the white supremacists and neo-Nazis and questioned his "many sides" comments. "I've seen Raiders of the Lost Ark, and I wasn't confused by it. Nazis are always bad," she said, before turning her attention to the fact that there are dozens more white supremacist rallies scheduled to take place across the country in the coming weeks and months. And it's here that Fey started her very own grassroots movement: "sheetcaking."

"I would urge people this Saturday, instead of participating in the screaming matches and potential violence, find a local business you support — maybe a Jewish-run bakery, or an African American-run bakery — order a cake with the American flag on it, and just eat it," Fey said, after which she launched into some fierce commentary on Charlottesville between bites of cake. From Standing Rock to Hillary, no stone was left unturned — after which Fey explained, "Sheetcaking is a grassroots movement. Most of the women I know have been doing it once a week since the election."

Watch the clip in full above, and check out the action that Tina Fey has inspired with the hashtag #sheetcaking on social media.

Rege-Jean Page
I've Watched Regé-Jean Page's SNL Monologue About 20 Times Now, and I'm Still Not Over It
by Monica Sisavat 21/2 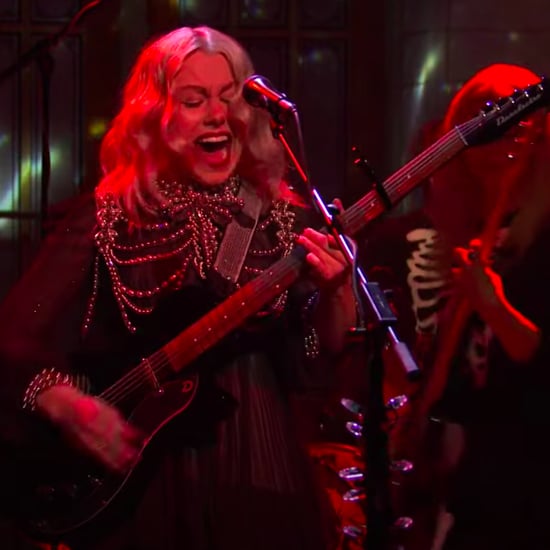