Tom Felton is at the tail end of promotion for the final installment of the Harry Potter franchise. He was in the States last night for the NYC premiere of Harry Potter and the Deathly Hallows Part 2, and Tom also appeared at Sunday's press conference. Tom spoke about portraying a bad guy like Draco Malfoy, as well as his most embarrassing moment on set. He also mentioned what it was like to work with his real-life girlfriend, Jade Gordon. Tom said: 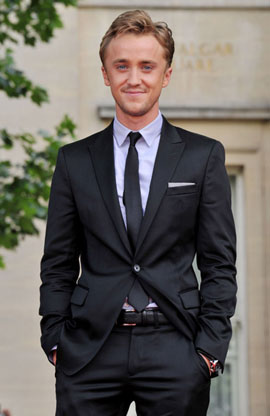 To read what Tom says about working with his real-life girlfriend as well as maybe becoming a professional musician, just read more.