The remake of Total Recall is heading into theaters this Summer, with Colin Farrell taking on the role of Doug Quaid (played by Arnold Schwarzenegger in the 1990 original). Set in a futuristic society, the movie follows Doug, a factory worker who decides to check out a mysterious place called Rekall to get a break from his daily life and have his fantasies implanted as memories. His little mind vacation is interrupted when a white-haired John Cho freaks out and stops the procedure, suspecting Doug as a spy. Doug is confused, and even more so when he suddenly has super-spy skills, like wasting every soldier who tries to stop him. When he gets home to his lovely wife (Kate Beckinsale), it turns out that she's also different, and trying to kill Doug too. 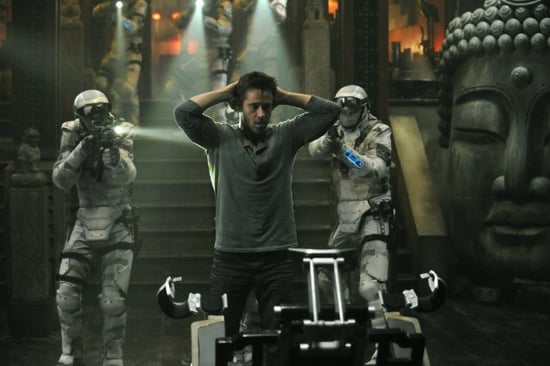 I'm admittedly not a huge fan of the '90s sci-fi flick, but this trailer is so action-packed that I'm interested, and the special effects look absolutely fantastic in this preview. And it certainly does not hurt that Farrell looks great kicking butt and taking names. Watch the trailer to see what you think, and get a look at the rest of the cast, which also includes Jessica Biel and Bryan Cranston after the jump.