Playing a grumpy old man must be like slipping on an old shoe for Clint Eastwood, who embodies a curmudgeon yet again as an aging baseball scout in Trouble With the Curve. He elects to go on one last recruiting trip, accompanied by his daughter (Amy Adams), with whom he shares a rocky relationship. Lucky for her, she gets more than just backhanded compliments from her father out of the trip; a handsome fellow recruiter (Justin Timberlake) shows up on the scene and takes an interest in her. 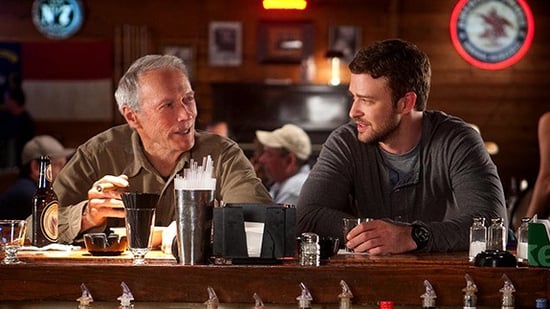 Call me a sucker, but my heart swelled just a little bigger while watching the trailer (likely because Phillip Phillips's "Home" plays, and that song turns me into a puddle of mush). While I wouldn't have necessarily paired Adams and Timberlake, I like them a lot together, and the tension between Adams's character and her father gives the film just enough depth to explore. Trouble With the Curve opens Sept. 21, and you can watch the trailer after the jump.