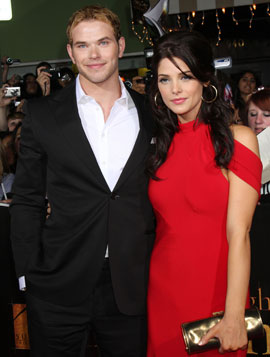 Breathe a sigh of relief, Cullen fans: Ashley Greene and Kellan Lutz have finally signed up for Breaking Dawn. The future of the two actors playing Alice and Emmett was in doubt following contract negotiations. They have now resolved their salary dispute with Summit, and will reportedly each receive $1.25million per movie.

The studio has confirmed the entire Cullen family will be back, although it's still not certain whether the final book in the Twilight saga will be one or two films. Kellan and Ashley have stuck together throughout the talks, and have shown lots of Twitter love for each other. Are you relieved to see the same actors resume their roles?