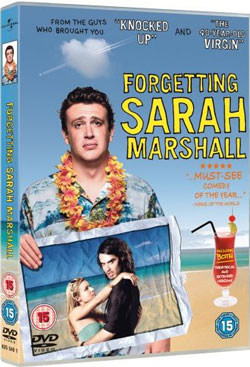 I've seen Forgetting Sarah Marshall a handful of times now, and after each viewing I love it a little bit more — so you can be sure that I'm going to recommend this DVD (out today) highly!

I think your enjoyment of this movie will partly depend on whether you're in the camp that love Russell Brand (or are fairly indifferent), or the camp that hate him with a vengeance. I'm in the former, so his part in this film is a highlight for me — he plays English rock star Aldous Snow, the man that Peter Bretter (Jason Segel) has lost his TV star girlfriend to.

Segel was one of the most likable characters in the original Apatow-produced TV series Freaks and Geeks and he continues that tradition in this film — he's all lanky, goofy, lovable charm. He wrote the movie, and really puts himself out there both physically and emotionally. The naked break-up scene between Peter and Sarah? That actually happened to him, so he put it in the movie — full frontal shots and all!

To see more of my thoughts, as well as Russell Brand / Aldous Snow singing "Do Something", just read more.

Following the break-up, Peter heads off to Hawaii for some distance from all things that remind him of Sarah, but of course she's staying at the same resort with Aldous. But wait, there's also a cute hotel receptionist called Rachel (Mila Kunis) — could she help him out of his depression?!

Mila is adorable in her role as Rachel, it's such a departure from Jackie in That 70s Show, and Kristen Bell holds her own in the fairly unforgiving role of Sarah. Her scenes on the CSI-alike TV show that Sarah and musician Peter work on are very funny, with cameos from Alec Baldwin and Jason Bateman. Also, I can't forget Jonah Hill, who is another highlight as a waiter who's somewhat obsessed with Aldous.

As you watch the movie it looks like everyone had an awesome time making the film, and when you listen to the commentary it's so clear they had a blast. The DVD is packed with special features, of which the story-filled commentary was my main highlight, but there's also Line-O-Rama where you see the actors improvise lines different to those that made it into the final scene, and a brilliant look at Jason Segel performing his Dracula rock-opera song to the cast at an early script read-through. There's also the usual deleted and extended scenes as well as the full version of Aldous Snow and Infant Sorrow's video for "Do Something" (see below).

Forgetting Sarah Marshall is a fun film, and this release is full of extras — I'd highly recommend you give it a go, it's out today.