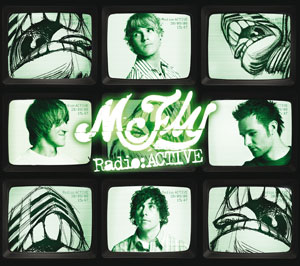 In July, McFly gave away their album Radio:ACTIVE with a Sunday newspaper, and today they've put the CD out on general release, adding three extra tracks (including latest single "Lies") and a two part documentary about the making of the album and the promotion that followed it.

If you're a McFly fan (and I love those boys) you know what to expect — big choruses, catchy riffs, and strong hooks that create alternately fun and angsty power pop melodies. On this disc — their fourth album, but the first on their own record label Super Records — they've amped up the guitars and energy on all the self-penned tracks. The stand-out songs are "Lies", "Smile", "Corrupted" and "The Last Song", but I enjoyed the album as a whole, though it could be said that a couple of the tracks feel a little too similar.

To read more of my thoughts on the album and DVD, find out which member of the band was hypnotised in Australia as well as who the most competitive McFly man is, just read more.

As I mentioned, the DVD has a two part in-depth "The Making of Radio:ACTIVE" documentary, with the first part following the boys in Australia as they made the album. It has input from hyperactive producer Jason, manager Fletch (who you may have seen on short-running MTV series America Or Busted) and various other people who work with the band. We get a peek behind the scenes at Harry's competitiveness, and Dougie as the permanent target of the others' pranks, and then we get a walk through the songs on the album. There's a whole bunch of footage of their down time too including clips of the amiable boys doing some surfing, a funny section where Tom is hypnotised on stage in Australia at a comedy club, and shaky footage of the band skydiving. The second part of the documentary shows the band promoting the album, including their time at T4 On The Beach (see if you can spot me!), their Olympic party performance and shooting their latest bizarre video for "Lies".

All in all it's a great package for fans of the band, and those curious about the making of the album. If you're not too bothered about the DVD and packaging though, you could preview and buy the individual extra tracks on iTunes.