Kick-Ass is released in the US next Friday and last night Aaron Johnson appeared on Jimmy Kimmel's late night show to promote the movie. Following a much talked about interview on Jonathan Ross's show where Aaron was very quiet and distracted, he seemed a little more relaxed on Jimmy's show sitting next to Luke Wilson who was the other guest. He talked about the American accent he put on for his role as Dave Lizewski and after actually pausing to work out how to say something without swearing he blurted out a curse word which had to be bleeped — although as Jimmy noted, not many of the American audience could probably understand what he's saying with his English accent anyway. After all the promotion of this movie maybe he'll be a pro at these interviews! 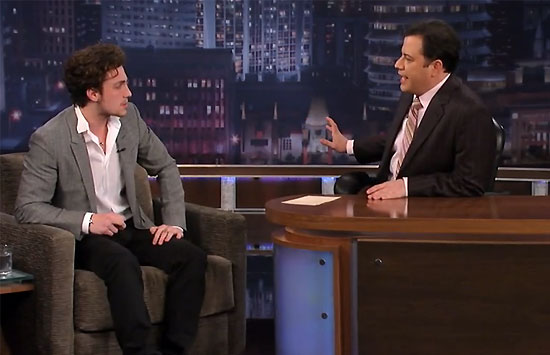 To watch Aaron's appearance on the show, just read more.