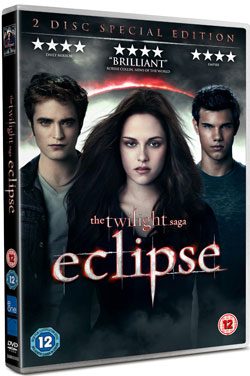 We've got a Wednesday Twilight treat for you! In this exclusive clip, which features on the Eclipse DVD, the director David Slade reveals what attracted him to Eclipse. As he discusses the film, we get behind-the-scenes peeks at Robert Pattinson and Kristen Stewart filming the meadow scene, Taylor Lautner fooling around on set, and lots more.

David chatted to me about the meadow scene at the Eclipse premiere in London this Summer, and admitted that it was during that period that he realised Robert and Kristen were a couple. The must have movie is yours to own from Dec. 6, but you can get an early look at some of the special features by watching the video after the jump!

Watch the video when you read more.